Category Archives: it's all about me

Normally, magic elves go back to the North Pole with Santa on Christmas Eve. But we got special permission to keep ours with us a little longer, since Auntie J was coming just after Christmas for a visit and we wanted to introduce them.

So the mischief lasted a little longer. A “snowdrift” of styrofoam, reading a book about flower fairies on top of the tallest bookshelf, setting up the Star Wars and Littlest Pet Shop figures in the kids’ room…. On the last day the elves were thoughtful enough to bring a couple of giant Christmas pencils and set up the homeschool books for the day. They also left notes requesting that the kids pack up their clothes and items for their return trip.

Altogether, it was a wonderful visit. We are definitely inviting the elves back again (in fact, the kids want to invite a couple more to join in as well), though they likely won’t stay quite as long this time.

Larger photos in the set here.

Ever since Halloween I hadn’t been able to find my little point and shoot camera. APPARENTLY the elves found it, because the next morning we found an interesting mini-tripod setup in front of the tree, and a ton of photos on the camera. Peeking into the frig, out of the microwave, eating their crackers, climbing in the tree, cuddling their kids – and even a couple on Santa’s boots. Clearly a busy evening – and what else would you expect for elves on Christmas Eve?

Check out these photos larger: the set is here.

The next morning when we woke up the elves were no longer in their bed. We’d been warned there would probably be mischief, hide and seek, and other unexpected adventures (some people call them elf-capades, but that sounds a little too much like an ice dancing show for me). But then – we opened the frig, and there they were! I guess they missed the cold.

Most days the elves’ main activity was hide and seek. We made them some clothes – pajamas shown here. Some of their other adventures included trying to untangle Christmas lights, stacking up all the Christmas movies (and bringing a new one – Elf), playing on the swing set and the tricycle outside, and getting out all the playdough in the house. They hid in cupboards and the silverware drawer. They started up the computer and were found playing Lego Star Wars one morning, found some tiny playing cards that I had as a child and were interrupted in the middle of a card game.

My son’s birthday is in early December, and so one day they brought a gift – toy reindeer (they also got out our claymation Rudolph dvd set – it stays in the Christmas decor box the rest of the year), and one day they brought little Christmas themed coloring books and crayons. Another morning they were waiting expectantly with a gingerbread house kit, and once they took all the cookie making supplies and stacked them on the stool in the middle of the kitchen (with themselves in the plastic bowl at the top of the tower).

The best thing was probably the night that my daughter’s friend slept over and brought HER elf Ginger with her – the next morning they were nowhere to be found. But what was that? Our car was all turned around and askew – NOT how we left it the night before. When we went out to see what was up we discovered a team effort – Ginger steering, Priscilla buckled in (no doubt navigating) and Mickey working the gas petal. (And boy, you should’ve seen the half-delighted, half-freaked look on the kids’ faces.) I told the elves that next time they took the car out they should really bring back pizza. 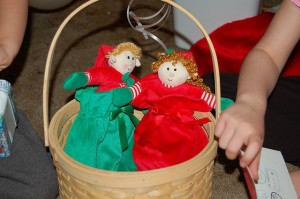 First of all, if you’d like to see these photos larger, the set is here.

So as I mentioned before, I first saw these elf shenanigans on Marci Lambert’s Make Art Every Day blog. And it looked awesome. I checked out Elf Magic and ordered a couple of tickets for two elves to come visit us last year.

Our elves arrived just after Thanksgiving as we were putting up Christmas decorations – they appeared on the doorstep in a basket with helium balloons. They brought magic snowflakes and elf sacks, as promised when I got their tickets. They also brought a little suitcase with some extra clothing, passports, and files on each of the kids, complete with a tiny elf-drawn sketch, likes and dislikes, and naughty/nice status. Also – blank paper to add notes as the month wore on. Which they did, weekly or so.

Their names were Priscilla Snowflake and Mickey McFrost. Judging by her loopy handwriting and abundant use of exclamation points, Priscilla was very excited about her visit. It turned out that Mickey was more cautious, having had a bad experience the year before while visiting a boy who was on the Naughty List.

Anyway, we tucked them into bed (used a shallow Amazon box with some of the airfilled packing material as a mattress; we had a candy-cane striped fleece blanket as well which I later sewed into two sleeping bags), sprinkled them with the magic snowflakes as instructed, and set out some crackers and water (their favorite snack – the crackers are crunchy like North Pole snow and the cold water is like melted snowflakes). As you can see, when we awoke the next morning they had also gotten into a leftover muffin…

I would maintain that thanks are the highest form of thought, and that gratitude is happiness doubled by wonder. – G.K. Chesterton

Comments Off on thanks giving

Posted in it's all about me, NaBloPoMo

All of us – plus an aunt and a friend.

(I am a pioneer, in case you can’t tell from the folded back bonnet.)

Comments Off on belated Halloween ’10

lists are the theme of the month around here

Posted on November 9, 2010 | Comments Off on lists are the theme of the month around here

I apologize – if it weren’t for NaBloPoMo I would spare you the uninspired, meaningless posts. (At least MOST of them…. ) What do you think – is it better to post consistently, but not necessarily great stuff, or is it better to wait till you really have something to say? Of course, I suppose sometimes we don’t learn what we have to say till we say it.

quaking aspen
Create a free website or blog at WordPress.com.